Long gone are the days when if you wanted to watch a film in style, you had to haul yourself (and your family) off to the cinema. Today, most of us either have or have given thought to having a home cinema. If you haven’t set one up yet (or even if you have but the setup doesn’t work for you), there are a couple of things you should consider when planning your home theater to get the most out of your experience.

The shape of the room which will play host to your home theatre is actually, rather important. There is no one-shape which you must have, but you need to plan everything around the shape of that room.

For starters, where are the windows and what kind of light comes in through them, and when? If the sunlight shines in through your windows at a time when you don’t watch television, it’s hardly a big deal. However, if the sun shines brightly and reflects onto your screen when you want to watch a film, that’s a problem. You could rectify this issue with thick curtains or blinds but situating your home theatre away from the windows’ glare is an alternative if you don’t want to fork out more cash. 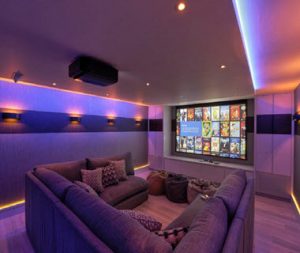 If your home theatre room suddenly looks too dark, there are ways to fix that, too. LED lights are ideal, since they don’t give off much heat or glare, and are cheap as chips to run. Setting some up around the back of your television set is handy, especially for that cosy night in front of the box.

Aside from the DVD/Blu-Ray player, you’re also going to want to think about internet capabilities. Many of us watch Netflix and other streaming services, so wherever you put your Smart TV, you’re going to need to be in the range of your router. Most modern routers cover wide areas, but you still want your theatre as close as possible to the action.

Similarly, the layout of the couches or sofas must also be in the right spot. You want as many directly in front of the television as possible but not too close or too far. The bigger the Smart TV, the further away you can be.

Don’t worry too much about sound. With a decent home theatre, being far away from the television isn’t a problem. Most of the best home theatres have four standing speakers. If they are “towers”, you can place them on the floor, or you can elect to put them up on the walls if they are smaller and mountable. Either way, you’re going to want them to surround your “home theatre area” not necessarily be pegged to the four corners of the room. This way, your audio experience is as immersive as possible.