In addition, the Smart TV LG 4K 43 inch 43UK6340PTF also supports TV control by phone via LG TV Plus application and easily projects the phone screen on the TV with Screen Mirroring feature.

TCL 4K 50 inch L50P65-UF: For as little as $ 390, users can easily own a large 50-inch TV with state-of-the-art technology. The device has 50-inch panels with extremely sharp 4K resolution, built-in HDR and Micro Dimming technology to optimize images and contrast.

The device is considered to have large, clear sound thanks to the proprietary V-audio audio technology developed by Panasonic. The device runs My Home Screen operating system is simple to use, rich application store. This device also supports projecting the phone screen on the TV and controlling the TV by phone with the Panasonic Remote 2 application.

Nokia is very committed to its projects in the future by launching cheap smart TV products that compete with Samsung and LG first in India and other markets in 2020.
No longer rumors, leaks, the official announcement from Nokia about the first smart TV introduction event in India in early December, the first smart TV with Nokia brand is launched.
Not only Indians, but most of us think that Nokia is just a phone maker. However, this is not a new field of Nokia, in fact, it had produced widescreen TVs in the 90s of the last century but they have never been successful.

However, with the plan to launch a new low-cost smart TV in the Indian market, it will be a positive step as well as demonstrate all efforts that Nokia is making to return to the position of a technology giant such as old.
According to Endgadget, Nokia will not directly produce its low-cost TVs in this market. Instead, another giant called Flipkart will take on the role with the Nokia brand.
Specifically, Nokia TV models will be manufactured by Indian electronics company Skyworth, a subsidiary of Skyworth based in China, and Skyquad in a factory called Hyeadad.
This way of working is similar to the way Nokia makes smartphones but is released by HMD Global as it is today. There is now official information on the low-cost TV models that will be available at the end of the year event.
At the present time Samsung is facing many difficulties with the market of cheap smart TVs in India. This is a better opportunity for Nokia to capture this billion-dollar market before competing in other markets. And if successful, it is likely that in the near future we will see the return of Nokia for many areas from phones to both audio-visual entertainment and wearables.

Smart TV: Samsung Stands Out Due to Technology Innovation

Samsung pioneered the technology of panels from FullHD, 4K to 8K and embarked on many partners, including Apple, to provide a high-quality content repository.

According to the announcement from HIS DisplaySearch, a global data and data analysis company, Samsung is the brand that has sold the world’s No. 1 TV for 13 consecutive years from 2006 to 2018. This is also an important milestone when coincides with the 50th anniversary of Samsung Electronics electronics establishment.

YouGov Plan & Track, the brand that has the most positive impression for women in 2018, also honors Samsung technology company at number one.

HS Kim, President and CEO of Consumer Electronics at Samsung Electronics, said that over the past five decades the company has continually innovated products from size, design to platform technology. To be welcomed by users, the company undergoes a long process of product research and improvement.

In 2009, Samsung introduced consumers to the world’s first LED TV. A year later, Full HD TV came out with 1920×1080 resolution. 2013 was the milestone marking Samsung’s first line of 4K TVs available in the market. Its proprietary Quantum Dot technology is appreciated by technology experts for its brightness and color accuracy. By 2019, Samsung confirmed its technological strength with the first model 8K QLED TV on the market. 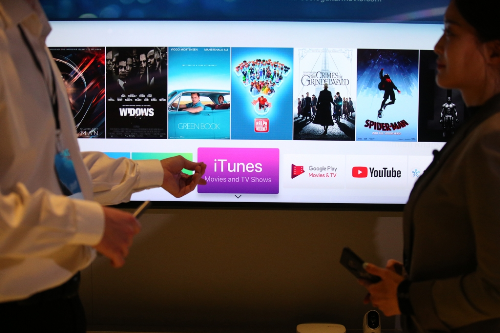 Besides, the company also focuses on creating user experience with smart TV. The number of Samsung Smart TV applications has reached more than 4,000 from Youtube, Netflix and the latest is iTunes Movies to serve all the needs of users. Last February, Samsung announced the launch of the world’s largest QLED 8K high-end TV line, equipped with 8K Real 8K Resolution, Q HDR and Quantum Processor 8K quantum processors.

Until now, Samsung Smart TV continues to develop to reinforce the leading position in consumer choices. Earlier this year, Samsung also announced the cooperation with rival Apple on the TV segment. Accordingly, Samsung 2019 TV will support watching content from iTunes and AirPlay 2. Users in more than 100 countries around the world of Samsung can access the rich and high-quality content repository of Apple.